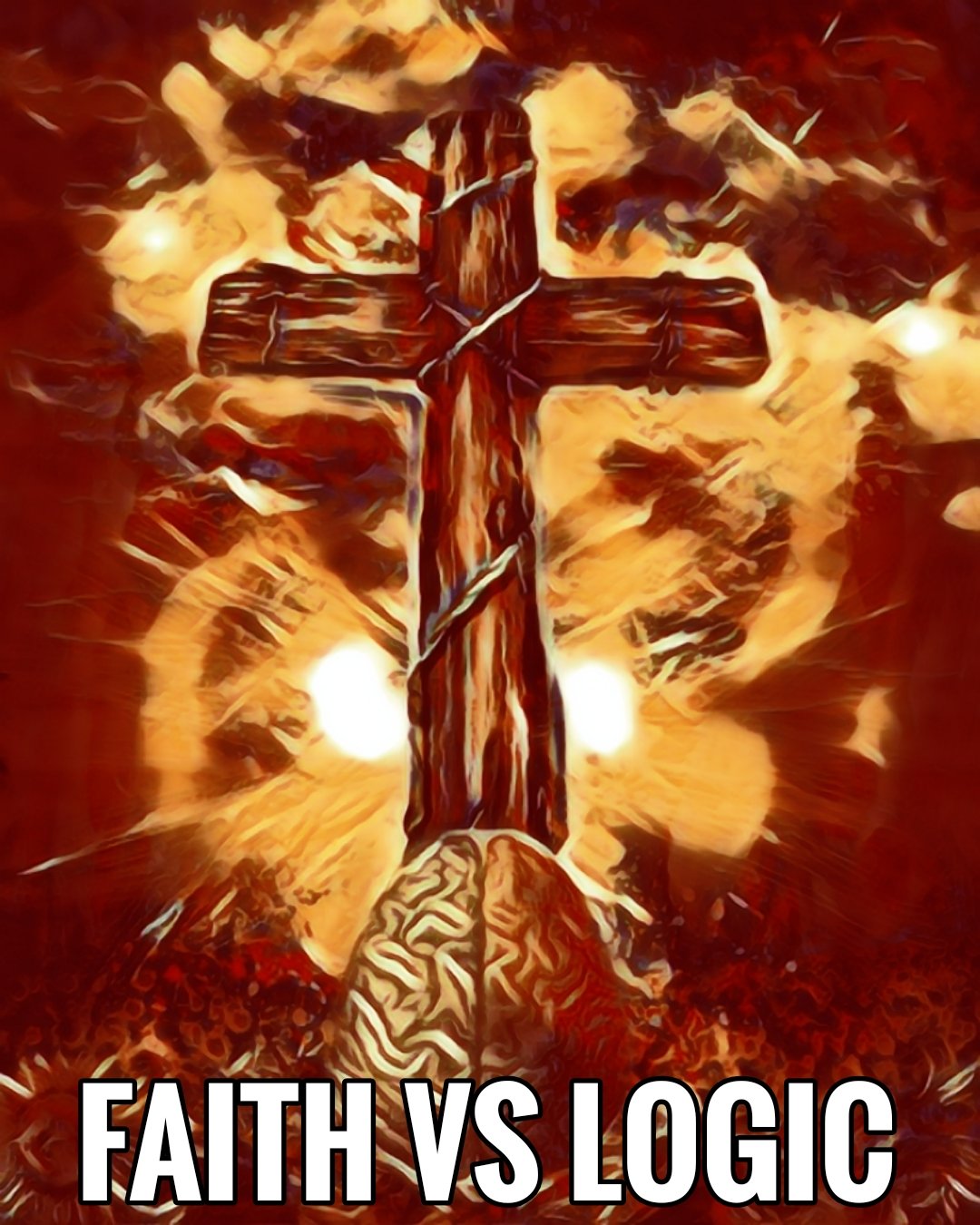 There comes a time in our lives where faith and logic collide and due to many reasons: but one that we will focus on now is that the Lord is trying to get you to realize to not lean onto your own understanding and your own thoughts with logic. Our thoughts and our way of thinking often conflict with the word of God if we are not being led by His Spirit. For example when David a ruddy boy confronted Goliath logic would tell David not to confront Goliath, but faith in God told him to confront him. Remember it's not yourself that you rely on, nor your might or power but faith in God's promises. To put it simple and sweet HIS WORD. If we acknowledged God in all that we do: from politics, to how we run ministry, to who we date or who we have in our inner circle God will direct us in the right direction; the word says that all things work for the good of those who love God to them that are called according to His purpose [Romans 8:28]. Another thing is keeping God's commandments, not forgetting them and staying true to biblical truth instead of logical truth. Meditate on the scripture below this scripture alone can definitely get you on track with following the Lord.

1 My son, forget not my law; but let thine heart keep my commandments: 2 For length of days, and long life, and peace, shall they add to thee. 3 Let not mercy and truth forsake thee: bind them about thy neck; write them upon the table of thine heart: 4 So shalt thou find favour and good understanding in the sight of God and man. 5 Trust in the Lord with all thine heart; and lean not unto thine own understanding. 6 In all thy ways acknowledge him, and he shall direct thy paths. 7 Be not wise in thine own eyes: fear the Lord, and depart from evil. 8 It shall be health to thy navel, and marrow to thy bones.

Now to get to the meat and potatoes of faith vs logic we have to investigate what each word means, and give examples in scripture when faith was applied vs a time of logic.

1) complete trust or confidence in someone or something. (i.e God)

2) strong belief in God or in the doctrines of a religion, based on spiritual apprehension rather than proof.

1 Now faith is the substance of things hoped for, the evidence of things not seen.
2 For by it the elders obtained a good report.

3 Through faith we understand that the worlds were framed by the word of God, so that things which are seen were not made of things which do appear. 4 By faith Abel offered unto God a more excellent sacrifice than Cain, by which he obtained witness that he was righteous, God testifying of his gifts: and by it he being dead yet speaketh. 5 By faith Enoch was translated that he should not see death; and was not found, because God had translated him: for before his translation he had this testimony, that he pleased God.
6 But without faith it is impossible to please him: for he that cometh to God must believe that he is, and that he is a rewarder of them that diligently seek him.

1) reasoning conducted or assessed according to strict principles of validity.

2) the quality of being justifiable by reason

Now that we got the definitions nothing is wrong with using logic for the Lord does call us to make righteous judgment, but it becomes a problem when it conflicts with what God wants us to do out of faith.

Going back to Proverbs 3: 5 “Trust in the Lord with all thine heart; and lean not unto thine own understanding” we can see here that God is commanding us not to lean on our own understanding which is a form of us using our own logic. By the definitions that we have for logic you see that the human mind wants things to be justified by reason. As sentient beings we want everything to make sense to us because it gives us a feeling of having some sort of power over our lives or reason to validate something. If we breakdown the definition of reason in the appropriate context it comes down to rationality. Reason: the power of the mind to think, understand, and form judgments by a process of logic. When using logic it comes down to our five senses. Seeing, hearing, tasting, sense of touch and smelling. By these things humans and other lifeforms with deduction skills can draw a conclusion with logic that what we see, hear, taste, touch, or smell can be deemed as a logical explanation. Our brain conducts and assesses the situation and creates validation. Now faith may defy logic and sometimes will challenge the the brains reasoning ability. As we said before it doesn't seem logical or rational for David a youth untrained in combat to battle a warrior like Goliath. David had some experience from protecting sheep but not all out combat through military practices. To move in faith is to know more of the word of God as the bible says faith comes by hearing and hearing by the word of God.

So then faith comes by hearing, and hearing by the word of God

Sometimes logic will have you moving in fear and fear is construct of the enemy to hinder you from walking in what God wants from you. Remember perfect love cast out fear and God didn't give us the Spirit of fear as we will discuss later. The thoughts that you may have is from rationalizing things from fear or lack of faith. We must take those thoughts captive and present them to the Lord. Acknowledge God when you feel fear or doubtful on a situation because you may end up exalting your feelings, thoughts, and desires above God's if you don't recognize that is what you're doing.

4 For the weapons of our warfare are not carnal but mighty in God for pulling down strongholds, 5 casting down arguments and every high thing that exalts itself against the knowledge of God, bringing every thought into captivity to the obedience of Christ,

The more word of God you have the more you can move in faith which we know only by faith we can please God. Knowing the word of God is pleasing to the Father. Lets take a look at faith being exhibited by David when he come to the battle with Goliath. You will see that David had unwavering faith that God would deliver his enemy to Israel because he knows the word of the Lord. He also shows no fear and to walk with authority in the Word of God.

42 And when the Philistine looked about and saw David, he disdained[a] him; for he was only a youth, ruddy and good-looking. 43 So the Philistine said to David, “Am I a dog, that you come to me with sticks?” And the Philistine cursed David by his gods. 44 And the Philistine said to David, “Come to me, and I will give your flesh to the birds of the air and the beasts of the field!”
45 Then David said to the Philistine, “You come to me with a sword, with a spear, and with a javelin. But I come to you in the name of the Lord of hosts, the God of the armies of Israel, whom you have defied. 46 This day the Lord will deliver you into my hand, and I will strike you and take your head from you. And this day I will give the carcasses of the camp of the Philistines to the birds of the air and the wild beasts of the earth, that all the earth may know that there is a God in Israel. 47 Then all this assembly shall know that the Lord does not save with sword and spear; for the battle is the Lord’s, and He will give you into our hands.”
48 So it was, when the Philistine arose and came and drew near to meet David, that David hurried and ran toward the army to meet the Philistine. 49 Then David put his hand in his bag and took out a stone; and he slung it and struck the Philistine in his forehead, so that the stone sank into his forehead, and he fell on his face to the earth. 50 So David prevailed over the Philistine with a sling and a stone, and struck the Philistine and killed him. But there was no sword in the hand of David. 51 Therefore David ran and stood over the Philistine, took his sword and drew it out of its sheath and killed him, and cut off his head with it.
And when the Philistines saw that their champion was dead, they fled.

As you see here the faith and boldness David orchestrated to battle Goliath not knowing the outcome but speaking victory in faith. Remember faith is the substance of things hoped for and the evidence of things not yet seen. He put his faith in victory hoping in God for an outcome that he didn't know would happen; God was pleased and moved on His behalf fighting David's battle through a stone being thrown striking the enemy down. Logic would tell you that this story is farfetched and that a boy with no armor or no skill in battle would defeat a warrior on Goliath's caliber. Sometimes you need to get out of God's way and move in faith. This is where we must also exert wisdom by acknowledging the Lord in all our ways so He can direct our paths and be filled with His word.

You only have as much power and faith by the word of God you know. This is why God says my people are destroyed for a lack of knowledge. He also tells us with all thy getting get an understanding, and to study ourselves approved. Hope this message blessed you and may you share it with the next to help improve someone's faith.

Father thank you for your word being true and thank you for the knowledge and wisdom you give us freely when we ask. Father may you forgive me for not exercising my faith and acknowledging you in my day to day activities, as You said Father to acknowledge you in all thy ways and you shall direct thy paths. Father direct my footsteps with faith instead of relying on logical explanations that hinder moving in faith. May you remove my thoughts and subject them to the obedience of Christ and remove anything that hinders me from flowing in your Spirit Mighty God. So that I may operate in faith and not in fear for you haven't given us the Spirit of fear but of power and of love and of a sound mind. Your word also says perfect love cast out fear so fill me love to cast out fear. Mold me, break me, fill me with your Spirit to be who you called me to be Father according to your will for my life in Jesus name. Amen.