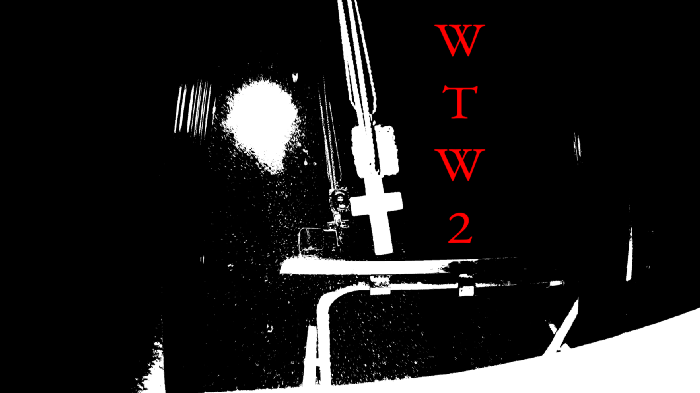 She couldn’t see much beyond the outlines made by broken window-light. A bulking tower formed in the center of the basement. Unlike the Tower in the City, this one was rough, jagged, unsightly as it stood. Cramped clutter forced her along small pathways as she felt her way forward. Clangs, shuffles, smashes echoed from the boy darting along in the great beyond.

From the corner of the room a beam blasted forth and struck the monument. The whole room shined and glistened. Sleet’s eyes widened with amazement, dazzled by the piles of treasure. It rose through the remains of the fallen first floor. The rest of the building could now be seen clearly. Trash and scraps surrounded the perimeter with all of the best, brightest, most beautiful items piled high through the fallen-out floor.

Above this marvel is what remained of a living room ceiling, empty light sockets, and a fan. High high above. In not too much time the tower would reach even beyond the first floor. The more obvious entrance to this hideout was the main-floor door that lead to nowhere. Nowhere but a haphazard hand-made staircase that lead down to the basement treasury.

All hastily stacked on each other. But, not so hastily that their plunder may be damaged. No. With haste and with care this avante garde art of arts made a marvelous mosaic. Yet, one misstep, or, a little bit of effort, would topple the whole tower and scatter the treasures across the room. But, sticking to the pathways, sticking to the outskirts, Sleet did her best not to trouble the precarious wonder before her.

The boy walked back towards her, the torch fixated on the handiwork of him and his brothers whilst triumphantly spinning the Crown around his finger. Confidence, accomplishment exuded from the little lad. So much so you would be forgiven for mistaking him for one thrice his age. The true years of him or any other in this place? Unknown. In appearance and maturity, no greater than 10 to Sleet’s 14.

“I’ve never shown this to anyone else. My brothers told me not to… But with this!…” He raised the Crown… “We’ve done it! I’ve done it!” He puffed out his chest, proudly.

Sleet didn’t focus on the boy and his words, or the Crown in his hand. Instead she continued her fixation with the tower. She asked the boy…

“Why? Why do you and your brothers build like this?”

The boy answered, “Oh that’s easy. We explored all this City together. But not that black Tower… You saw it didn’t you? We always wanted to go in there. My brothers told stories ‘bout all the fancy stuff we find in there. Bunch’a cool things we find. I’d put ’em aaaaaaaaaaaall the way at the top!” He stood on his tip-toes and raised his Crown-hand hiiiiiiigh in the air. His balance wavered and so too did the flashlight. The unsteady rocking danced off every little doodad dabbled ‘round the room.

“Wow! Now I really want to go!” Sleet was rapt with attention, enamored by this urban legend presented so gallantly by this very young man.

Then he shrunk, shrugged, and sighed dramatically to himself. “But we looked and looked and… There ain’t no way in there. And, well, I uh, I got bored of the City. My brothers told me not to…” The boy shifted nervously to himself, eyeing both ways to make sure no other ears were near. “I went outside the City. But it’s ok! It’s ok! Look what I have! I-I have it! I got it!”

He shook the Crown profusely in front of Sleet’s face to plead his defense. “They can’t be mad at me now that I got it. Some of ’em didn’t think it was real. The Crown. But it’s… It’s real… It’s so… Great! I’m so happy to have it. They can’t be mad.” Arms crossed, eyes closed, he nodded knowingly to himself. Whilst anyone else would have seen through this ruse, Sleet was utterly convinced.

“Yes! I’m sure they’ll be happy. Now this Crown, is it great like the Tower? Better than all the things you have here?”

Sleet cocked her head to one side and stuck a probing finger toward the Crown. The moment she touched its (nearly) unblemished sheen a torrent of images flashed in her widened eyes. The Tower, an explosion, a microphone, a throne, a sceptre, a woman, shade everywhere. Her irises fluttered luminous white and her jaw hung slack as her whole body wobbled weakly. The finale was a wash of color that enveloped, swaddled the girl in red, green, blue, blue, blue, blue, blue, blue.

Swiftly the Crown was yanked from her reach in response. Sleet jolted away with a gasp as her vision returned to her. She fell back a single step then shot her hands to her checks. Perspired, panting, off-balance, her bulky sleeves slid down her thin arms aimed up and heaven, comforting the shaken girl. The boy didn’t even notice Sleet’s mystical jaunt, but instead greedily wiped any foreign fingerprints off the Crown with his grimy shirt and said…

“Oh yeah, so much more than the Tower. This is the greatest treasure of ’em all. My oldest brother Esrael told me this story, he-”. Rustling from above interrupted our host’s next monologue. Chattering voices and clattering locks on the upstairs door could mean only one thing.

“Oh no! They’re here! Ah ah ah you have to go Sleet! I’ll be in trouble!” Panicked, the boy pushed Sleet back to the secret entrance. Crawling up bits of junk, salvage, and souvenir, she squeezed out the window.

“Wait! Before you go, what’s your name?” Asked Sleet intently, looking him in the eyes through the opening. He looked down at the Crown in his hand, then met her eyes again through strands of crimson hair. With all his being he answered…

Sleet was left alone again. But this time with a sea of new thoughts to pour over. Not only this, but a peculiar City to get lost in. And get lost she did. Wasting no time she hastened back to her theatre home. The only trouble was she hadn’t the slightest idea how to get there. Instead she wandered ever deeper into the remains of the once dazzling City. All the while she reflected on her not-so-distant past.

Once upon a time Sleet was calm, simple, amused, enthralled really, in her theatre. In her home. Now all this? What to make of it… What to make of it… She was by herself like she had always been, but this time she felt it. Her mind whirled with what fate befell her whilst she retraced her steps back to her resting place. Or at least, as she attempted to… As best she could…