Arrivals and departures (I): on terminal stations and history.

When I move to a new city, a curious rite of passage tells me when I have finally settled in: I stop taking the names of places in their literal sense. In other words, it is when my brain stops decoding terminal stations and street signs as a signifier for something, rather than somewhere. At this point, I also stop creating expectations about a neighborhood, through the impressions evoked by its name (“Eaux-vives”) or chime (“Testaccio”), and start, instead, to associate the name with the experiences I had there. With my native São Paulo, my place of arrival into the world, and from where I will forever depart, this moment, the city too well known to me, was an impossibility. That’s unfortunate, because one can, for instance, take the metro there and disembark at Paraíso (“paradise”) or, stay in the blue-line train for three stops longer, and get off at Liberdade (“freedom”). Instead, school ruined paradise by being there, and freedom came to taste like Sukiyaki.

In our hometowns, this transmutation of places’ meanings coincides, rather, with losing the literalness of a child’s eyes. A “Jardim X” is not a garden, a “Granja Y” and a “Chácara Z” are neither farms nor ranches (at least not anymore), we learn. In São Paulo children can, however, still feast on toponyms in Tupi-Guarani – a family of indigenous languages that gave us words like Ibirapuera (a park), Anhamgabaú (a valley) or Jaraguá (the city’s highest point), shaping their meaning according to their magical sound. For, at no point during our schooling do we learn to interpret them, nor do we learn what ancestral reason, or more recent pretext – a version of the language was taken up by colonizers as well – led to their adoption. We learn to read Portuguese, but not Brazil.

The place I departed from, to come to Rome, was Geneva. Because I had arrived there only six months before, the names of places still startled me with their literalness. There was, for instance, the “OMS”(in English, WHO) bus line. Seeing it stop at traffic lights, pick up passengers and depart once more made me think of how people arrive at this seemingly omnipresent institution from somewhere in the morning, and where they depart to again later in the day; it made the human realities behind the OMS both palpable and fragile – a far cry from the all-powerful entity some make it out to be. Then there’s Line 11: Bout-du-monde. The entire time it felt like an impending destination. This being 2020, visiting the park with that peculiar name did nothing to change this.

I came to Rome to understand the trajectories of two movements that shaped Italy in the 1970s: communism and feminism. More significantly, to inquire about the stations (or chapters) of their forgotten encounter, both fertile and tense. This story continued into the 1980s, the ending of which coincided with a historical terminus for the communist tradition (and for left-wing contestation more generally), considering that the Italian Communist Party (PCI), once a fixed point of postwar Italian politics, dissolved in 1991.

In its heyday, PCI leadership was often referred to by the address of its Roman headquarters, the Botteghe Oscure or, more playfully, “Bottegone”. In the 2010s, the building was acquired by the Associazone Bancaria Italiana, Italy’s union of bankers; it is now a supermarket. In July this year, another real-estate transaction helped put distance between the past and present of that road; the far-right party La Lega decided to move its headquarters to the building directly across the old “Bottegone”, from where, it is said, the CIA used to spy on the then most powerful communist party in the “West” (La Stampa – 08/07/2020).

If the Via delle Botteghe Oscure encapsulates the stark tones of before and after in the history of communism in Italy, the history of feminism in this country, and in Rome in particular, is a tale of many addresses. Below is a listing of the various feminist organizations active in the city in 1978 : 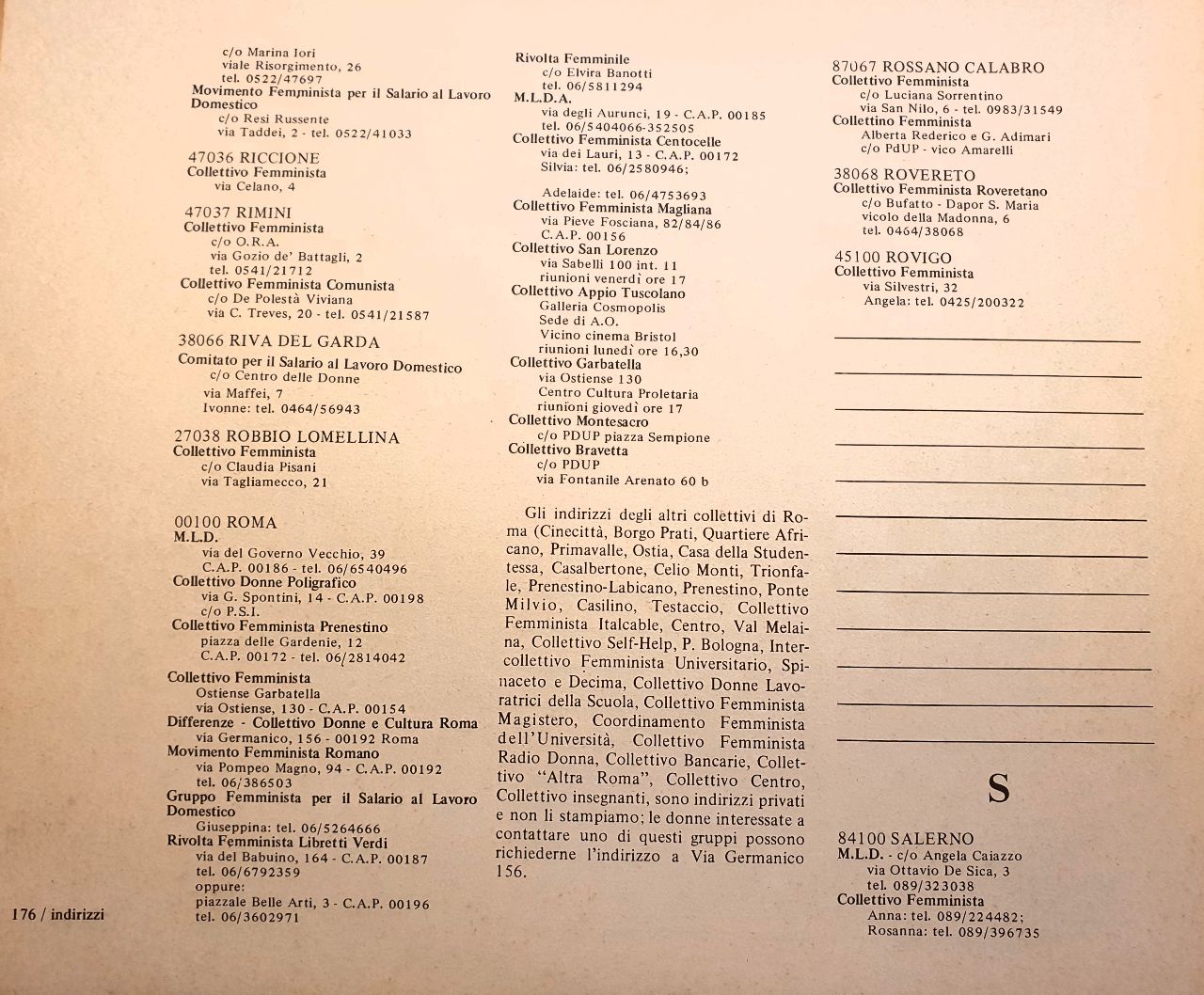 The list was not complete: feminism was a “lavoro in corso”, a work-in-progress, hence the authors’ decision to leave blank lines for subsequent additions. This contrast between diffusion and centralism, dynamism and rigidity helped put communism and feminism in separate compartments of the historical narrative as well. Indeed, besides the “years of lead” – a reference to the political and state violence of the period – the Italian 1970s are known mainly as the “years of the movements”; foremost amongst them was the women’s movement, which hit Italian society tsunami-like, en route to a series of achievements over the course of the decade. Yet this was also the last peak of relevance for communist politics in Italy, symbolized by the Berlinguer-led PCI.

A closer look at this historical constellation shows, in fact, these were not parallel or mutually exclusive trends, but that communist and feminist politics were intertwined in important ways from the mid-1970s into the late-1980s in Italy (and elsewhere). Many feminist women entered the PCI, even more of them were part of the UDI (Unione donne italiane), the mass organization of communist and socialist women, which became increasingly militant in those years. Reconstructing this attempt to fuse a communist and a feminist identity, through archival material, visual sources and interviews, constitutes my project as a resident in Rome. This is a story of ‘intersectionality’, in the sense that both class and gender politics were integral parts of the trajectories and everyday praxis of women activists; often, this combination played out on the terrain of a further political vector (and locus for the utopia of both communists and feminists) of the time: Third World solidarity. More on this in my next contribution.