Anarchy and the Collapse of the West

Today, I want to convince you of something else. I think some of my
other letters and emails have been well received, and it is my hope
that this one will be as well. I am, however, somewhat conscious of
the fact that what I am about to say will probably not be as easy to
digest as before:

I believe we here in the West—Australia most perceptibly—are undergoing a process of political, economic—societal—collapse.

Some of the most obvious signs that this is so is the social and and individual atomisation that is continuing to accelerate in our communities. To put myself—for example—to productive use in our city, I have had to engage various forms of state and non-governmental (read: privatised) organisations in order to navigate my way through mental health rehabilitation. Each interaction I have with a person who represents these bodies is more faceless than the next. I have no idea what relationship each Centrelink officer bears with the others. The whole process is as mysterious to me as it is harrowing.

Another prominent example I have to evince for my argument that our
society is collapsing is to point to a factor that is even more baldly situated in materialist analysis: the cost of living.

We—and I mean each of us concretely and locally—are not merely a
generation relatively more impoverished than the last. We are many
times more impoverished. Somehow, I think the reality that we, us
youngsters, may be just as, if not less wealthy than our great
grandparents may be difficult to accept. But I think it is
true. Whatever social equality that was reached in the late-1970s and
early-1980s here in Australia has more than completely been undone.

If you need me to provide some numeric data on the issue, I believe I
can. Just look at the graphs recently calculated that illustrate the
share of GDP that returns to capital as opposed to the people: ‌ 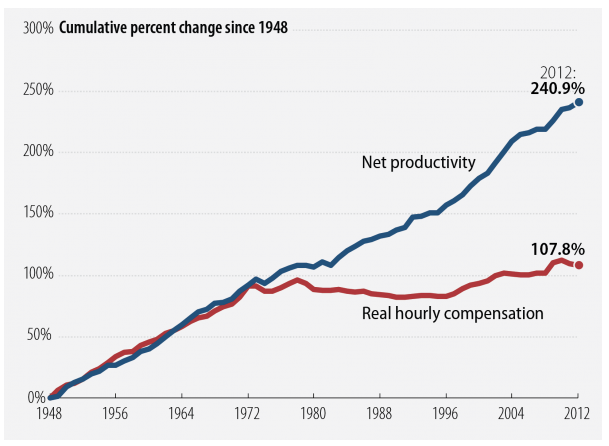 This is enough for myself alone to remain convinced that we are
undergoing a societal collapse. We, the workers, the people, have not
really gotten any wealthier than we were in 1972.

What Is To Be Done?

The silver lining in these dark clouds I predict—certainly the trend
is going to continue, and things will degenerate further—is that
Anarchy has, perhaps for the first time in a long while, a chance for
a beautiful flourishing. Nobody but the anarchists has the correct
analysis, and most effective remedy to State and Capital. The
Bureaucratisation of human social relations, and abject plundering of
our human energies and creative essence by State Capital does not have to continue.

Many I talk to—either somewhat educated on the topic, or otherwise—on the radical left who do not identify with anarchism seem completely unable to grasp the nuance that Anarchy does not represent “Chaos”, and “Hyper-individualism”. It lead me, for a time, to believe that anarchists must be a somewhat fanatical and impulsive bunch.

I suppose I find this instructive. Along with my observation that
“Anarchy” is on the lips of many youngsters these days,* I think we
may be able to identify three lessons about the perennial fact that
anarchism is a philosophy that is misunderstood due, in large part, to
ignorance.

These lessons are that we can:

In the interest of brevity, I will only say one thing in support of
each of these points.

We should, in the case of point #0, never forget that anarchists have
the clearest and most solid biological argument for our vision of a
new society. Let us hold our comrade Peter Kropotkin in high
esteem. Over and over again it has been demonstrated that organisms
that become organised into societies of cooperative and socially
interdependent patterns are the ones that best 'succeed' in adapting
to their environmental selection pressures.

Further, when I turn to address #2, I cannot help but be reminded of
the practice of anarchism we undertake here in Perth. The reason
anarchy remains a live undertaking here, I feel, is the solid cadre of
comrades that have coalesced around our collective practice. It is our
interpersonal practice here, our interrelated and intersubjective
understanding of the tradition that allows us to be strong. If anarchy
didn't begin with the concept of Free Association, we would be
no-where near as deep and firmly committed here in Perth as we are. We would be battered leaves in the wind.

I feel this naturally leads me to conclude with the second lesson that
we will be able to impart on others in the context of our societal
collapse here in the West. The precept of mutual aid unlocks the
anarchist secret to the abolition of Capital and the State. Not only
does anarchy demands that consumption be ethical—that is, free from
power relations; those of domination. It also insists that production
and distribution become transformed into processes free of hierarchy
as well. Somehow, Marxists believe that while production can be solely
relied upon to exculpate any immoralities within distribution and
consumption. Let this, too, be not forgotten.

I hope deeply in my heart that each of you are doing and surviving as
happily as you presently can,

* Indeed it may be that, if social forces where mechanical ones, the equal and opposite reaction to the massive speeding reach of the State in the wake of the Covid Pandemic is causing an increase in the popularity of Anarchy.